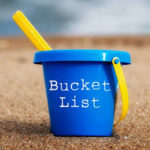 I am sitting in the Silvio Pettirossi International Airport in Asuncion, Paraguay, having a transformational moment. After having visited 90 countries, all 50 states and almost all of the major US national parks, many of these more than once (London 22 times!), I am tearing up my Bucket List.

This is a big deal.I made my first bucket list at age six when I saw the Disney Jungle River Cruise on TV. As I recall, it went down seven rivers in 20 minutes and ended in a visit with Trader Sam, who sold shrunken heads. I was hooked on travel ever since.

According to Webster’s dictionary, the term “bucket list” first came into our vocabulary in 2006, defined as “a list of things that one has not done before but wants to do before dying.” While the term has become wildly popular, for me it has a ring of desperation to it.

A scant one year after the term became part of our idiom, The Bucket Listwas released, a movie featuring two terminally ill men, pursuing a to-do list of things to try before it was too late.

When you think about it, a bucket list is a traveler’s version of “Live like it’s the last day of your life”—a philosophy so scary to me that it would prevent me from even going to brunch, let alone encourage me to climb Kilimanjaro or visit Machu Picchu.

So why did the idea of a bucket list become so popular?

Consider the many bucket list books, such as The Big Bucket List Book, a list of 133 must-see places…or the granddaddy of them all, 1,000 Places to See Before You Die. These books give the impression that there’s plenty of time to see everything in the world, so long as you just start now.

After all, the guys in The Bucket List movie had only six months to live—yet the implication was that they could complete the list. If they can do it, you can do it!

And it worked. Travel statistics are soaring. According to Condor Ferries Company, last year, boomers planned four to five leisure trips, spending more than $6,600  per person, on average. Furthermore, “38% of this generation [baby boomers] have a ‘travel bucket list’.”

According to the AARP, bucket list trips are one of the most popular type of international travel planned by those aged 55 to 75.

So why am I ditching my first bucket list for a new model? I have outgrown a traditional bucket list, made merely to prioritize places to see. If you are a veteran traveler, you may have, too.Boomers are the generation for which “If it’s Tuesday, it must be Belgium” style of organized tours was created. But, I’m kind of over that. I want travel that will build memories, not photo albums.

I remember…when the bus to Borneo in southeast Asia (yes, there is a bus from Kuching, Malaysia, to Borneo) stopped for a bathroom break. The passenger in the burka couldn’t use the Western stall, and I had a hard time with just a hole in the ground…so we switched Porta-Potties and acknowledged our differences with laughing eyes and a gesture of camaraderie.

I remember…when a little Kuna Indian child in Panama showed me how to make a fishing line from a discarded audiocassette tape…ingenious!

I remember…sipping tea with Bedouins in their Jordanian camp and how their candles lit up the entire hillside so I could feel safe as I slept in a tent.

Of course, I enjoyed great meals, wonderful music, dance festivals, palaces and cathedrals. But for me, the highlights were the people.

Now, it’s your turn. What really turns you on about travel? Put that on your second bucket list. Are you looking to make lasting friends who enjoy music and travel? If so, Theatrical Adventures is for you. They conduct river cruises, including the Moselle, Douro and down the Nile (where I got to balloon over the Valley of the Kings.) This March, they are cruising the Danube with a private orchestra on board.

If a long-distance walk through the Croatian countryside with like-minded companions sounds interesting, check out Free Walkers, made famous by their yearly 50-miles-in-a-day walk inspired by President John Kennedy’s 1963 fitness challenge. The walks attract folks from all over the world.

Whether it’s sharpening your cooking skills, taking classes with Road Scholar or spending a week at Oxford University getting the full classical experience, there are trips of all budgets and interests just for you.

And if giving back is your thrill, voluntourism is your watchword. My plan is to hook up with Operation Smile and Habitat for Humanity. If you love both walking and volunteering, consider swimming champion Diana Nyad’s Everwalk Organization. They go to Key West for a week each year, walking at least 10 miles a day, plus working with Habitat for Humanity in the afternoon.

Or try something that was never on your bucket list, at all. A friend persuaded me to go on a fishing adventure in Dutch Harbor, Alaska, and Umnak Island in the Aleutian Islands. You can get there only by instrument flying—that is, they use only small airplanes that have sophisticated instrument guidance to allow travel in limited visibility. I was fogged in with zero visibility that even instrument controls could not overcome and had to stay an extra four days. I discovered that mystery writer Dashiell Hammett was stationed there during WWII and was the editor of the US Army newspaper The Adakian.

Dr. Samuel Johnson said, “When a man is tired of London, he is tired of life.” That’s exactly how I feel about travel. If you feel the same way, check out social-media sites that connect you with new international friends. As we age, we often find our travel companions are not as active or as willing to travel as we are.

If you are traveling alone, contact the tourist boards of any country you plan to visit. They are most helpful in getting you together with host families to introduce you to the local culture. Bon voyage. Happy Second Bucket List!