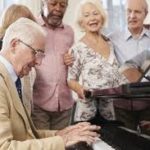 There are hundreds of songs, from Operetta to Country Music, written about growing older. They touch hearts, tell stories and inspire. Your favorite song about aging says a lot about you; how you feel about growing older. Make your listening of these songs a journey of self-discovery.

I had fun compiling this brief review of a few of my favorites. Listen to each one through the YouTube link I provide and see what feelings these songs trigger in you. You might be surprised. Then send me your favorites, and I will create an Official Aging for Beginners Play List.

SONGS ON SURVIVING AND THRIVING: For Cheerleaders of Aging

Top on my list is I'm Still Here from Sondheim's Follies. Carol Burnett tells us the song is about "survival, coming through, making it. By which I mean being happy with yourself."

But Shirley MacLaine's version is considered the ultimate rendition. And while the song is ostensibly about a woman in show business still touring after a certain age, MacLaine makes it about anger, banging on the piano unmercifully. Watch Shirley's fantastic performance. What do you make of the seminal moment when Shirley takes Meryl Streep's face in her hands? I think Meryl's eyes show the pain of uncertainty as she wonders if she will still be a star in the decades to come. What’s your take?

I could listen to Elaine Stritch's haunting version of I’m Still Here, over and over again. I’m not surprised that Sondheim asked her to sing it for his 80th birthday. There is something genuine. resigned and world-weary about the song coming from Stritch. You could call it wisdom.

SONGS THAT DENY AGING: For Those Militantly Young

Yes, I fight the stereotypes of ageism, frailty, decline, and uselessness because Look How Young I Feel! The original song by Angela Lansbury is my vote for the best version.

Despite the bravado of the lyrics, much like "60 is the new 30", there is something tragic here, too. Feeling young is not being young. There is a difference.

You’ll see the blatant recognition of this in the TV appearance of  Carol Channing and Tommy Tune, doing a hippy vs. older diva intergenerational version of the song.

I am always struck by performances by older women that start with wearing a cover-up, like a coat, and end body revealing. Andrea Martin took the house down in Pippen, just before she did a circus act at age 67 while singing No Time At All (another great song about aging). These costume tricks are spot-on metaphors…age is a coat that says I am old, but if you could see underneath, look how young I feel.

SONGS THAT WAX NOSTALGIC: For Those Longing For The Past

Gerontologists tell us that after a certain age, we enter a phase called "Life Review." Of the songs that resonate with that theme none stands out more than Frank Sinatra singing, It Was a Very Good Year.

I was struck in looking for more versions of the song at how much this is an older man's song. Not just because the lyrics tell of young women and sexual relationships, but because most older women do not miss their much younger selves. For us, it is mostly good riddance. You can't help aching at the embarrassment of youth when you hear Janis Ian sing At Seventeen.

To lighten the moment, check out Gilbert & Sullivan's operetta Patience for an anatomically correct recounting of how we go from young to old through sarcopenia (muscle loss that leads to sagging of the skin). Picture this. Lady Jane, a self-proclaimed “corpulent” older women, takes center stage. She drags in a cello, representing a woman's body as a literal instrument. She then tells us that there will be too much and too little of her as she morphs from trim beauty to withered legs and chubby torso. "Don't wait too long," she admonishes her lover, “Soon, it will be too late.” Empathize as British contralto Ann Collins opines about the "coming by and by."

SONGS THAT ARE WISTFUL: For The Sentimentalists

You can come to tears hearing Composer Kurt Weill's and Lyricist Maxwell Anderson's September Song about love in the last moments of our life. "It's a long, long way from May to December." In today's age of longevity, the way extends ever longer. Still, to every life, there comes the point when there isn’t much time left. That time is precious.

Of all the songs on the aging hit parade, the mood woven by September Song is most influenced by the style of the singer. Listen to the Sinatra version. Then the Durante version from 1972, and from 1955. See how the song changes with the age and character of the singer.

If you like a bit of spice in your last hurrah,  check out Willie Nelson singing the same song on the road again. You cannot help feeling deeply about your end game and how you see it.

If you are still not in tears, listen to Roy Orbison's rendition of Yesterday When I Was Young, and think of the difference in sentiment now and when you first heard the son. The song was written in 1954, in French, by Charles Aznavour (singing it here at age 92) and recorded a myriad of times in the past 55 years. Including by Aznavour in English. Which is your version of choice?

SONGS ABOUT ACCEPTANCE AND GRATITUDE: For The Self Actualized

Here's a song to cheer you up sung by Maurice Chevalier from the show Gigi, I'm Glad That I'm Not Young Anymore. Note that this resonated well with the Silent Generation. Boomers are more likely to identify with George Jones, who also embraces his aging as he sings, "My body's old, but it ain't impaired. Well, I Don't Need Your Rockin' Chair." Ironically, the bestselling book by anti-ageism activist Ashton Applewhite is called This Chair Rocks.

SONGS ON AGING AND LOSS: For The Realists

I must admit I was sorry I asked my husband what song about aging he would choose while I was eating a salmon salad sandwich. These sandwiches can be touchy on the tummy, and the sadness and despair of his choices put me off my food.

The first I had never heard of, but he says I did. He thinks I just blocked it out. It was Goodbye, My Friend, by Linda Ronstadt.  "Pick something else," I implored. "Ok, how about Those Were The Days My Friend.”

I soon began to recall song after song about loss, like  Memories from Cats, Ed Ames at age eighty-seven singing Try to Remember from The Fantasticks, and Emily Blunt singing Where the Lost Things Go, from the new Mary Poppins Returns. These last two songs are a must-listen if you never heard them.

Still, I rejected these from among my favorites. Death and age are not the same, and I refuse to make them so. And I am no fan of Harry Nilsson’s assisted suicide song, I’d Rather Be Dead, sung by a chorus of 80-100-year-olds who appear to be very happy to be alive, thank you.

SONGS FOR THE IMMORALISTS: For the Biohackers Among Us.

Noel Coward’s What Will Happen To The Tots? written in 1955 for the show Uncle Harry, It tells a prescient tale of today’s trend toward biohacking and what happens if no one grows old any longer…a hoot in both the original and recent versions.

It has been recently recorded by Australian diva Meow Meow, in her album The Little Mermaid

Am I Missing Something?

Hum. What could it be? Of course, Will You Still Love Me When I’m 64? It made me wonder, will you still love me if I left out your favorite song on aging? If so, send me a link at www.AdrianeBerg.com/contact. I am creating a compendium of such songs, and I need your help.